I had periods in my life when I was a news junkie signed up to hundreds of websites and moments when I’d delete all news and social media apps from my phone. If there’s one fundamental principle I believe and tend to apply to everything is that both sides of any spectrum are usually pretty bad and having some balance is the key. Also, for the past few years being immersed in the news became a core necessity for my job.

As I accepted it I began looking for a way to merely optimize my content consumption. It’s one thing to read a lot, it’s another to spend hours jumping between apps trying to get a dopamine hit and then getting caught in them. You open an email client to read some great newsletters (and a lot of good authors only send out newsletters without a corresponding blog), begin to think about work, start reading some marketing emails, then go to Twitter which always tries to put out some tweets you missed. That can go for hours. And every news website out there wants you to install their own app and put it right on the first home screen.

The solution I found was simple – I need a single app for all of that. Then I found Feedbin. It’s an RSS reader and a pretty advanced one. I knew about RSS long before, mostly to follow news websites and blogs. I usually used Feedly paired with some third-party readers, like Reeder or lire. 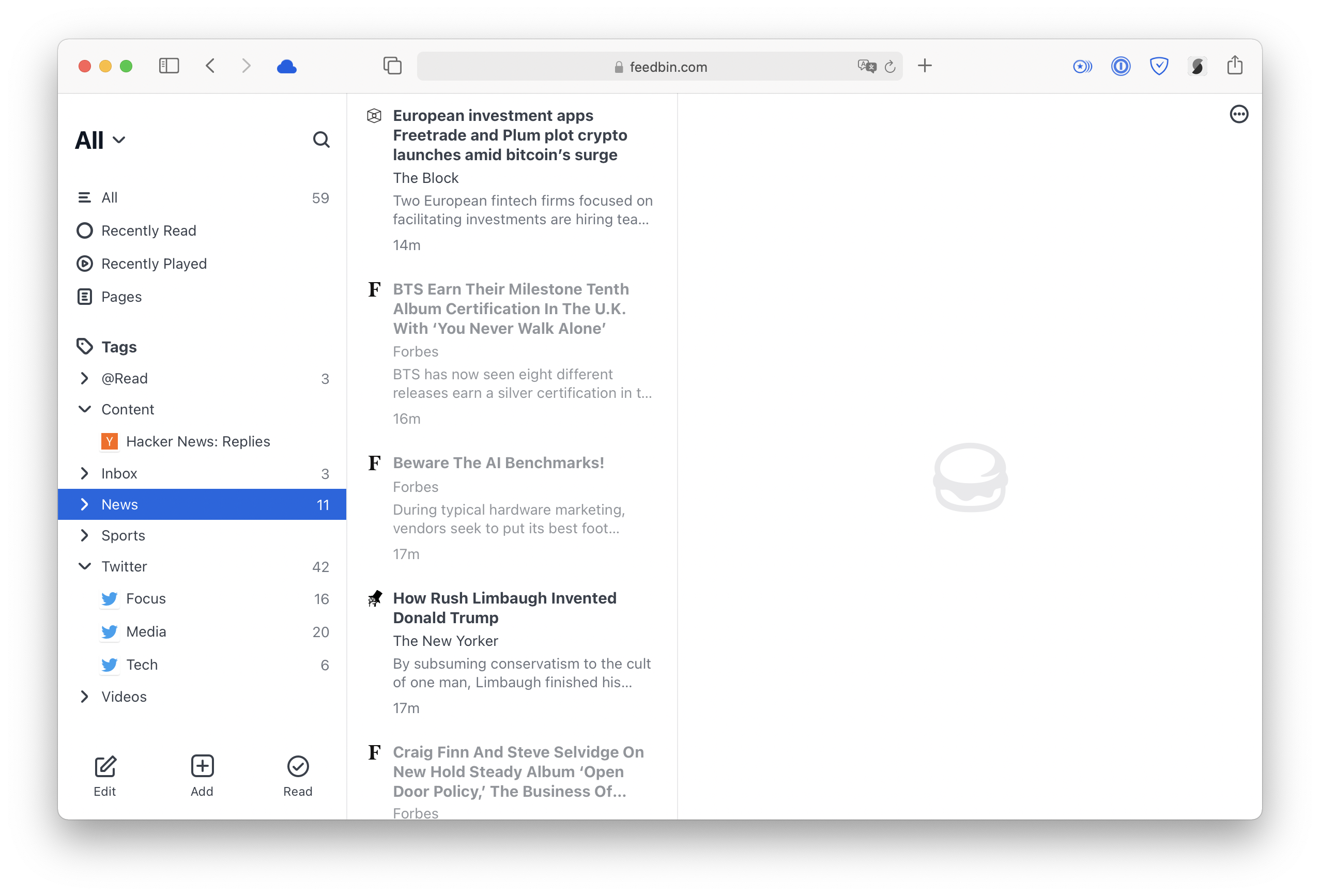 Feedbin allows to collect multiple types of content in a single place:

That allows it to act as a single app place all kinds of posts you might want to read. I no longer have to wander across multiple app trying to tell my brain I’m informed enough.

I’d even say it augments most of these sources.

And a lot of these are implemented in a smart way. For instance, in order to read newsletters through Feedbin, you need to either sign up with a specific email address it generates or just forward all emails to this account. But then it automatically recognizes different senders creating individual feeds for each. If a tweet you’re reading links to an article Feedbin also preloads its content and appends just next to it to give more context without you leaving the app.

I also wanted to get back to “some other weird stuff” just to show you some things that are possible in that space. You can turn other things into RSS feeds too! RSS Hub generates feeds for websites and services that don’t support it. I use it to follow Telegram channels without subscribing to them. There’s a third-party Hacker News RSS service that generates feed for all kinds of stuff, such as replies to your account that aren’t easy to follow. Most news websites and blogs out there do have RSS or Atom feeds (don’t think about that, it’s the same for you). Unfortunately, some don’t properly implement it by including a link in their webpages so Feedbin can’t find them. You can try searching specifically for the link to their RSS feed and add that. I think the only major news media that notoriously don’t provide feeds at all are Bloomberg and CNN.

Feedbin is definitely not the only RSS reader out there. If you want to try the concept out feel free to sign up for free alternatives, such as Feedly – although Feedbin does have a trial period. Inoreader provides a comparable set of features. But there’s one area where Feedbin really stands out from the pack – its interface. The design is just marvelous, while other RSS services feel either outdated or too clumsy. With Feedbin you don’t even need to have to go looking for a nice third-party client, it’s already good. There’s an iOS app but you can just use the web version which is actually a PWA (Progressive Web Application), meaning Chrome or iOS allow you to save it and treat it almost like a dedicated application.

There are three areas I believe could be improved even further and in no way that prevents me from using the app.

Feedbin costs $5 a month and it’s actually even cheaper than most plaid plans of other RSS readers. I do have to use the word RSS because that’s exactly what this is but it does have a reputation of something too geeky, especially if you ever followed a link titled RSS or Feed and saw a disgusting XML file in your browser for some reason. Don’t even worry. It’s just like Google News but only you decide what you see.