Mailbrew is an app that aims to offer you a healthy information diet. It allows you to receive news and content from the web in the form of regular digests. The idea behind it is to avoid the anxiety and guilt caused by endless feeds in social apps by doing bulk delivery of content at a pre-defined time throughout the day. If you commit to it you don’t just open the email, Twitter, a news app, and YouTube throughout the day to check if there’s something new – you know it will just come to you.

If you think about it, apps that actually care about you “completing” everything inside them like email are designed very differently from Twitter’s native app or Instagram. Gmail organizes everything into narrow lines, shows unread email and you can archive them to achieve “Inbox Zero”. Imagine if you had such an interface for Twitter? Mailbrew is like that.

I’ve been looking for something like this for years, even before Mailbrew itself existed. I’m a long-time user of RSS but most RSS readers don’t process too much content well enough. If you try subscribing to high-frequency feeds like Hacker News, you will soon be overloaded with new entries in them. You might even get something similar to banner blindness where you subconsciously try to scroll through them as quickly as possible missing the gems hidden in plain sight.

I’ve always felt you can solve it by creating automated digests for the most notable entries instead of making the users read through it all. I searched for these exact keywords and all kinds of permutations. IFTTT digests are cumbersome and ugly. Zapier requires a paid tier for digests and that’s not reasonable for personal use. I didn’t really expect anyone to build it until a found a predecessor to Mailbrew. 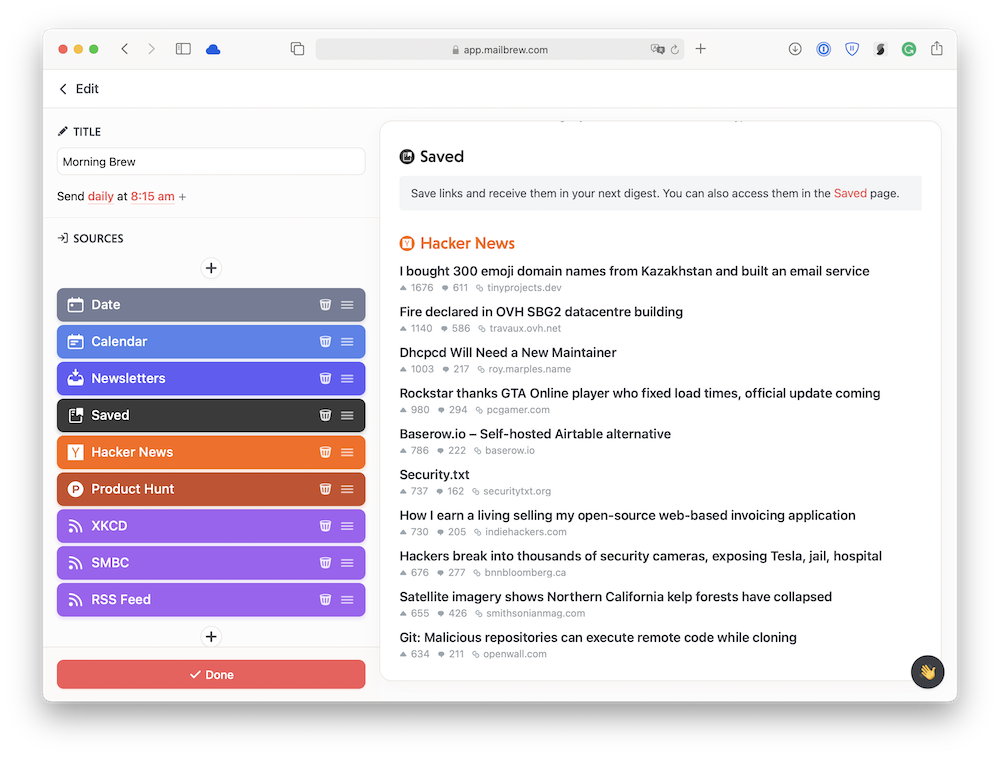 It’s been helping me cope with the amount of new content created every day for almost a year by this point. Probably the most difficult part about Mailbrew is that it requires an upfront investment – you have to set it up and find settings that suit you personally.

The “Brews” are the core functionality of the app. Brews are digests that collect new items from multiple sources of data, news, and content and generate a nice-looking email that you receive in your inbox at the time of your choosing. You can either set up dedicated brews for specific sources, such as a “Twitter Digest”, or just have a single “Morning Brew” that will act as a modern morning newspaper to pair with your coffee. 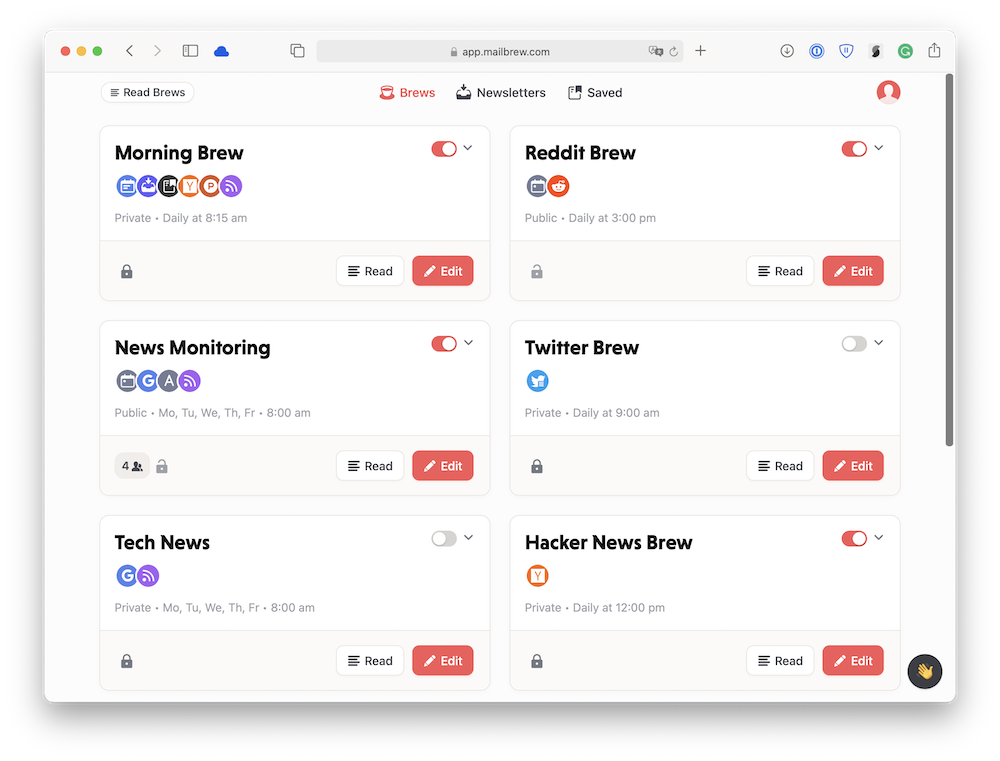 You create as many brews as you want (at least I haven’t found that limit), you decide what content you want to see in them, when do you want to receive it, and just turn it on. Mailbrew offers a wide range of sources ranging from RSS and Google News to Twitter and Youtube and website-specific sources. These integrations are even better than the RSS feeds those websites might provide because they take into account the ratings and popularity of the entries. You can set it to show the top 10 posts on Hacker News or the top 10 products at ProductHunt.

So with Mailbrew you can get an email every day looking like this:

The app always needs you to set the maximum number of items you want to receive from a source. That helps to protect from overly active feeds and sources, but with RSS it has an obvious issue where you aren’t getting the most popular items but merely the most recent. 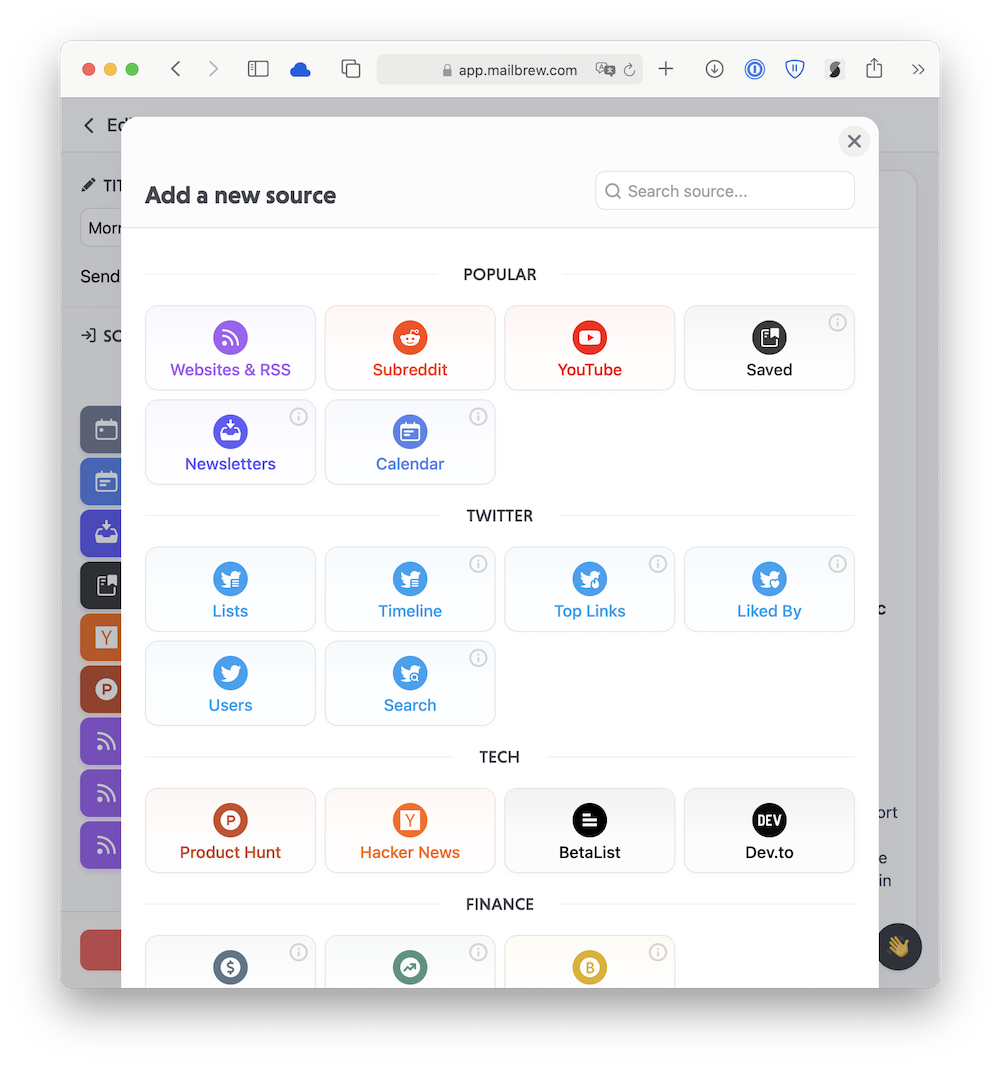 In the future, the teams want to provide an API so people could build their own sources programmatically. You also choose when the brew should be updated: weekly, daily, multiple times a day, etc. I receive most of them daily and disable the ones I need for work for the weekends. 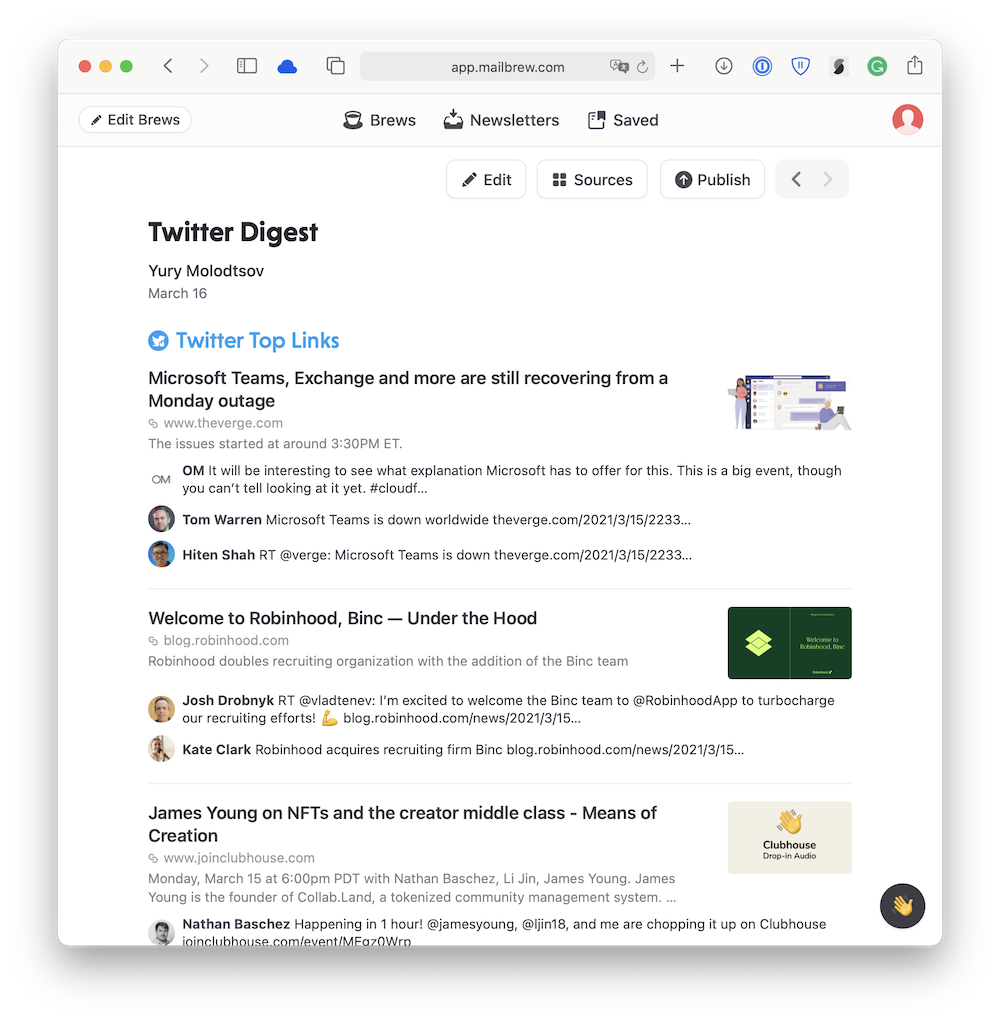 In one of their recent updates, Mailbrew introduced a much deeper integration with Twitter. Earlier you could only follow specific accounts and lists, selecting the most popular tweets posted there. Now you can do the same for your own Timeline and even collect external links posted by the users you follow. People who used Nuzzel in the past would find that feature very familiar. It’s great at surfacing breaking news and interesting blog posts I might have missed otherwise.

It’s interesting that Mailbrew also has a social aspect. You can make brews public, subscribe to other people to them, or even share a public link for anyone to follow. I used it to make a visually-appealing monitoring report for my team, some people use it to curate great art and content on the web. And in fact, you don’t even need to read brews in your email client. Instead, you can just read them in Mailbrew.

Another great part of Mailbrew is the “Newsletters” tab. You can use it to follow all your email subscriptions and reading the emails in something very close to the Feed interface at Hey, the email service by Basecamp. I truly enjoy this interface. Most other apps that want to be an inbox for your newsletters look either as a stylish magazine or a basic RSS reader and I like neither of those options. “Magazines” are too busy. RSS readers make you decide whether you want to read something based solely on a title and a few words. Also, you often have to read long text in just one third of your screen. 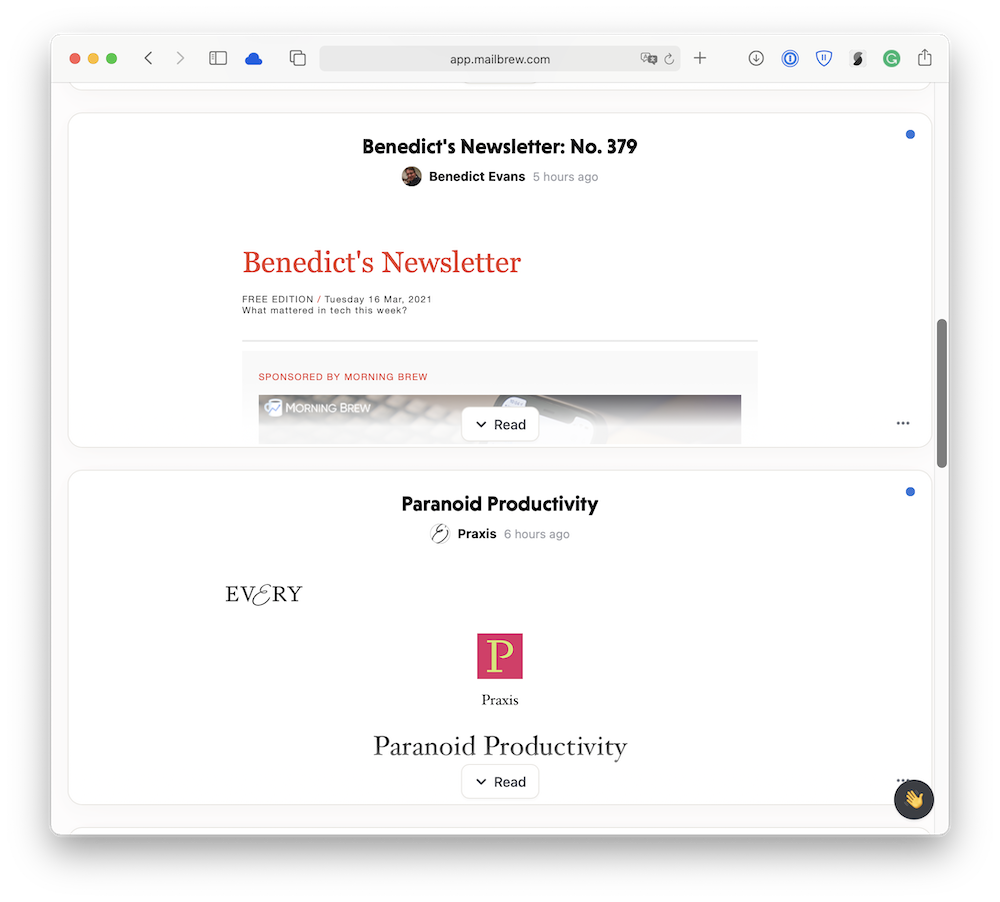 Mailbrew provides a beautiful full-screen reading experience and even keeps track of how much you read for every email, so you can always jump back it if you got distracted. The reading interface is very solid, I haven’t seen an email design that would break it in months. You also get a link to a hosted copy of any email if you want to share it with your friends to discuss something written there (please don’t share paid content).

All you need to do in order to receive newsletters in Mailbrew is forward them to a specific email address the app gives to you or just forward them on Gmail. If you don’t know about Gmail aliases I highly recommend you start using them now. You can add anything to your address after a plus sign, like alex+inbox@gmail.com, give it out to people and services and you will still get those emails. The difference is, you can now easily locate them and create a filter that would do something. I used it to mark all newsletters with a label, but when Mailbrew added the “Newsletters” features I simply enabled forwarding and didn’t have to do anything else, and I can also save those emails for posterity.

By the way, “Inbox” is also a source for brews, so you can see the list of all new email newsletters in your Morning Brew or any other digest.

The third tab is called “Saved” and that’s basically a very primitive read-it-later service. You can use a Chrome extension, a bookmarklet, or an iOS shortcut to save any links to Mailbrew and read them there. Just like with newsletters, brews have a specific source for saved articles, so it all integrates very nicely.

The reading view itself is very capable and processes articles quite nicely. 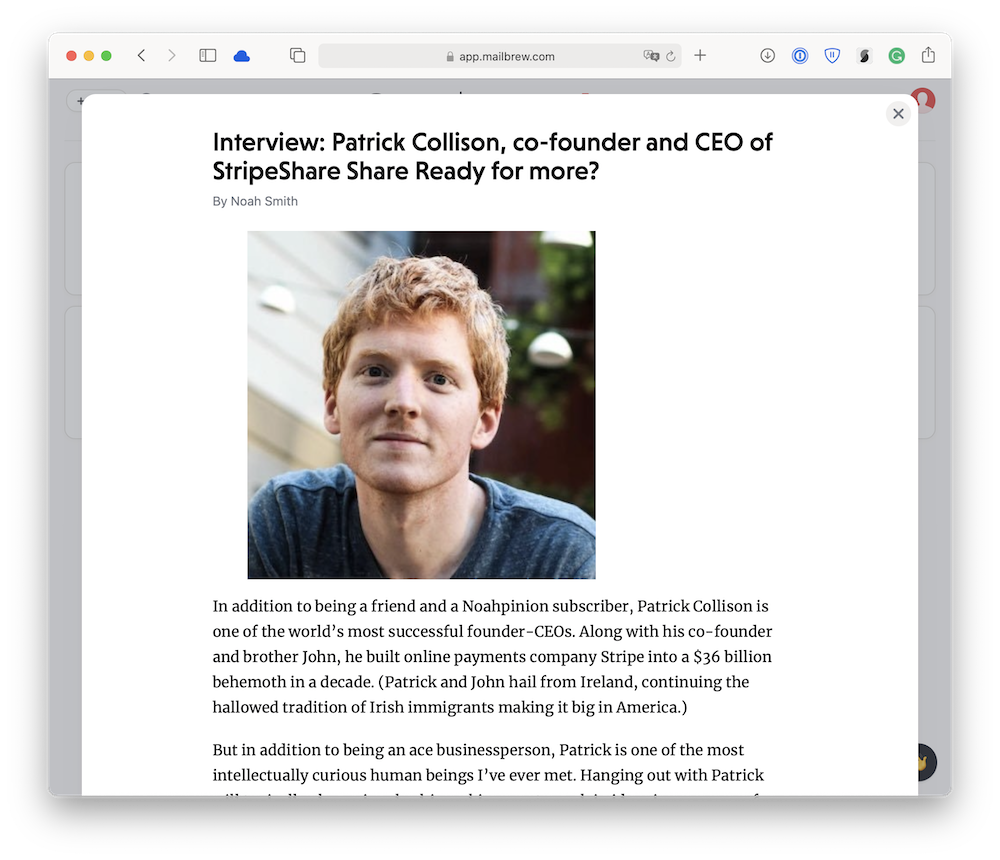 Mailbrew is a very responsive single-page application that feels almost like a native app in some ways. It’s desktop only for now but since it’s a PWA (Progressive Web App) you can “install” it on iOS and Android – Mailbrew is optimized specifically for that. It might lose state a bit more often than you’d expect from a native app, but otherwise, it’s very good. It also supports dark mode on all platforms.

There are few areas where I’d want it to improve:

Mailbrew costs $10 a month or $96 a year and I feel it’s justified. And there’s a trial period.

If you’re interested, you can try it out via this link.