COO and Partner @ MA Family, where we run communications for tech startups and VC firms.

I’ve always been one of the people who religiously live by their task manager – I can’t survive without one. That’s why I’m always surprised when I see someone get by without one. For a lot of people task managers only cause anxiety and end up abandoned and forgotten.

What if I told you that you were just using it wrong?

Almost everyone has a todo list but not everyone uses a task manager. Some people prefer paper, and even invent elaborate workflow and notations like Bullet Journal to supercharge it. Some of the busiest people I know put all their todos into a giant list in a note or a draft email somewhere. The basic notion is that if you’re what’s called a “knowledge worker” there’s probably enough things to remember to not trust your memory alone. That’s what a todo list is – a system of record where you can offload items from your brains and stop thinking about everything at once.

Being able to keep a record of things to do is important, but a plain list might become overwhelming especially as it gets large enough. That alone can negatively affect your performance, but most task manager apps out there actively add up to your anxiety with their UI choices. If so many people resort to plain lists instead of specialized apps there’s probably something wrong with them, isn’t it? I think so. First, they focus too much on deadlines. They shout at you, making your tasks red, showing badges for the things that are “overdue”. And then, in case that starts happening regularly enough, people get something similar to ad blindness – their mind actively avoids the idea that they’re late for something and the thing just keeps getting rolled over.

The most important thing: it’s OK if your todo list is never empty.

It’s not your calendar. It’s a list of things you don’t want to forget. Especially if you’re a manager, your job isn’t about jumping on every little thing – it’s about focusing on the right things. Choose the problems you want to tackle today. Tomorrow your priorities might change and you’d jump on the thing you left out today. You’re managing a waterfall, not trying to drink the entire thing.

A task manager can help you with that. And the first step is to choose the right app.

I’m using the one called Things 3. I’ve been using it for almost 5 years by this point and incredibly grateful to its team of developers. It’s pretty opinionated, so you might disagree with some of their choices. But I want to tell you about the key principles that I follow and you should be able to find alternatives that would fit. 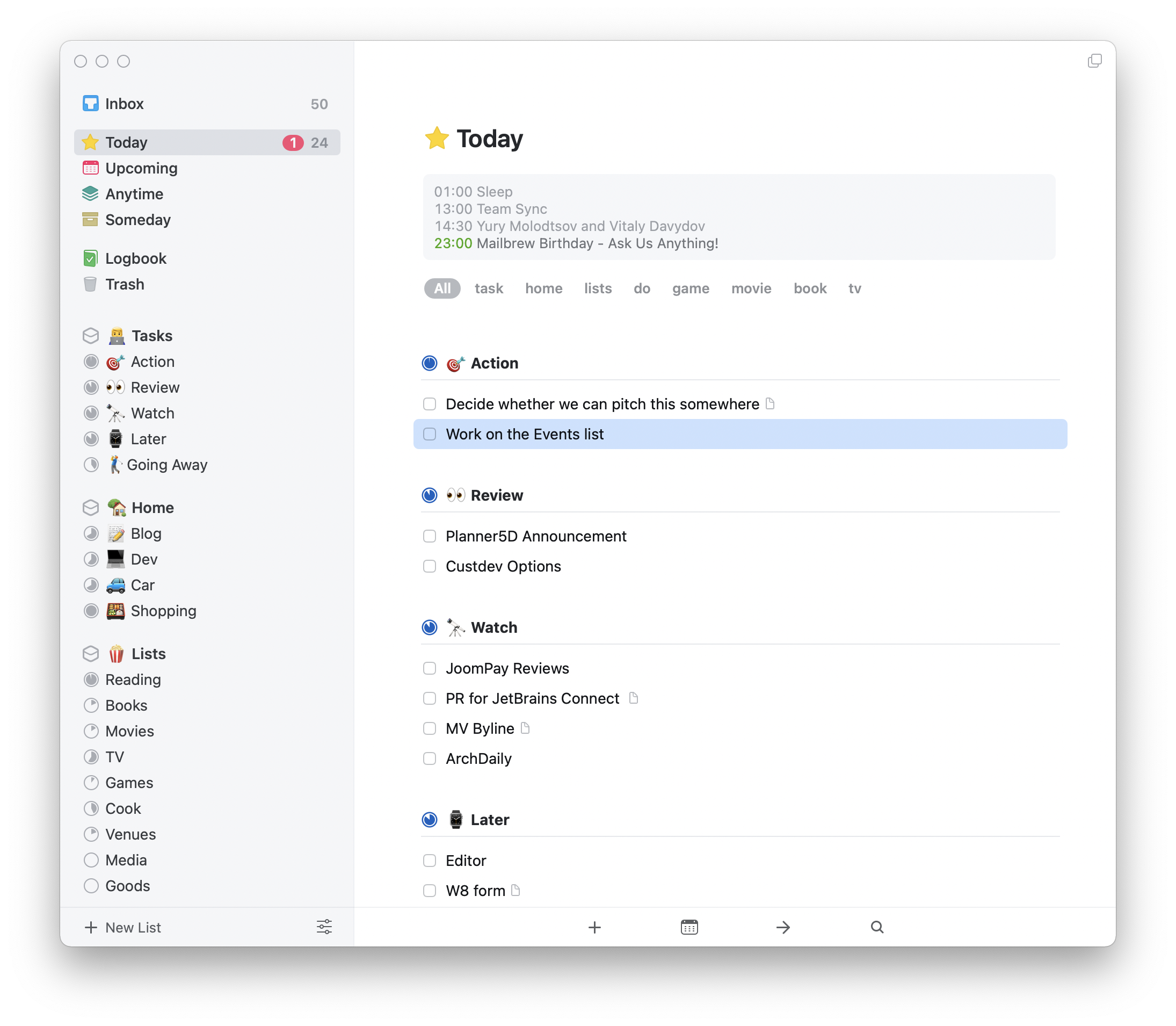 First, Things 3 distinguishes between the start date and the due date for each task. The start date is when it shows on your “Today” page. The due date is the actual deadline the task might have. Unless you specifically set the due date, the task just keeps rolling over to the next day. Second, the “Today” view presents all tasks organized by their areas and projects. Too many task managers suck at this. They present everything as an endless uniform list of entries with small notes about where they come from and they make you manually move overdue tasks every single day.

My entire workflow is built upon these premises:

You can use other apps. Todoist recently updated its sorting and filtering options so you can organize tasks by their projects (finally). Apple Reminders is a surprisingly decent app if you do just one thing differently – mark the things you want to work on right now with a flag. Don’t schedule them for “today”. Then you can have all of them collected in the “Flagged” smart list and you won’t be bugged with red entries.

I’m also using Things 3 for personal matters, from chores to a reading list and movie tracking. It’s much easier to keep everything in a single place instead of being locked in Goodreads, Letterboxd, Pocket. Also, browsers are already ideal for reading webpages.

There’s one other thing that no app has solved – fully connecting team and personal tasks, I even wrote about that earlier. Every person at every company out there ends up manually copying stuff from Asana to their personal list, simply because team collaboration software and personal task managers are optimized for different things.